About Jewish Wedding Ceremony: The Chuppah and its Customs

About Jewish Wedding Ceremony in Israel:  The Chuppah and its Customs

Other than being a very clear symbol of Judaism, the chuppah, or Jewish wedding ceremony, also represents the unity of the couple, a unique and magical moment which unites the two into one.

A Jewish wedding ceremony takes place under a chuppah which is made up of four poles supporting outstretched fabric, with additional fabric above.  The meaning of the chuppah is creating a home and making a statement in which the groom shows his serious intention towards his future wife.  The groom and the bride each represent their own families coming together, as well as the unity of the Jewish people. However, over the years, couples have changed the style of the ceremony under the chuppah, designing it according to their own tastes and even modifying key elements, whether by adding their own words to each other, as many couples do outside of Israel, or by abbreviating the blessings, although most rabbis prefer to retain the tradition in order to comply with halacha (Jewish law). Is there a limit to the number of people?

In the event that you wish to hold an intimate Jewish wedding ceremony for only immediate family, it is important that there be at a minimum a minyan (10-person quorum) of men who are over the age of bar mitzvah who can respond “Amen” to the blessings.

Do we need to add a tallit (prayer shawl) to the ceremony?

In principle, there’s no obligation to add a tallit—the canopy itself is sufficient—but this custom depends on the religious family background of the participants. 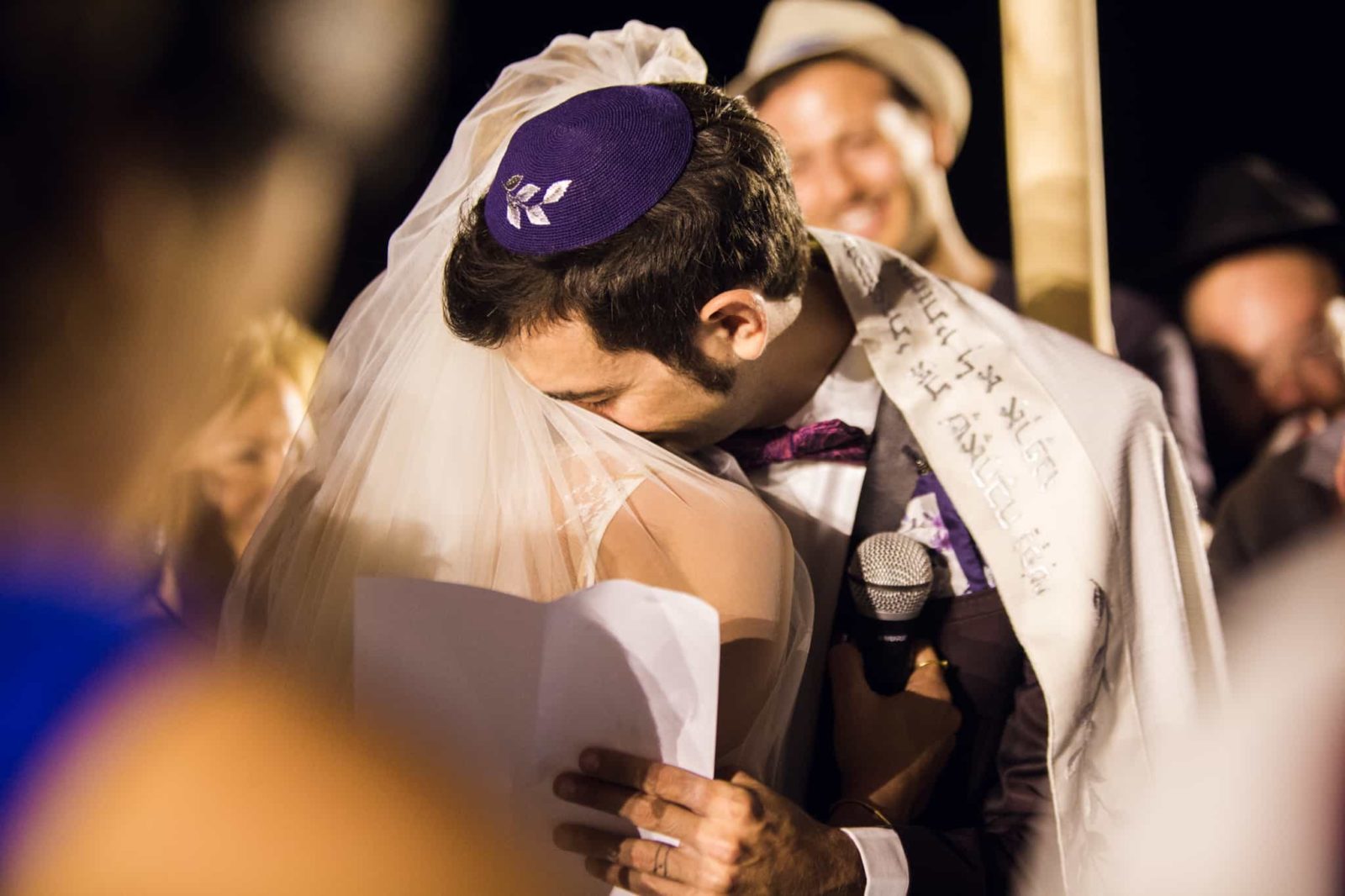 Must the chuppah be set up outside?

No, although this varies among different religious family backgrounds.  Ashkenazim (Jews from Europe) generally conduct the ceremony beneath the open sky, with the symbolic meaning of standing beneath the stars.

Is it possible to hold the ceremony on Friday?

Definitely!  The Jewish wedding ceremony can be held before 1 p.m. on Friday in order not to interfere with guests’ Shabbat observance.

What is the order of the ceremony under the chuppah?

Walking to the chuppah accompanied by parents or on your own (it’s your choice), then the groom covers the bride with the veil.  There are two initial blessings, drinking from the shared cup, placing the ring, reading of the ketubah, seven blessings (sheva brachot – this will vary depending on religious family background) and breaking the glass.

Under the chuppah, the bride and groom stand at the center with the bride standing on the groom’s right-hand side and their parents standing alongside.  Beneath the canopy are also the rabbi and two witnesses, along with any other friends and family who would like to participate in the ceremony.  Of course, parents, too, are not obligated to stand under the chuppah, but this can be a beautiful, emotional moment if parents are able to participate.

In the event that you are not interested in a traditional ceremony, feel free to think out of the box and create a Reform or non-religious service.  However, be aware that in that case, your marriage will not be registered with the Israeli rabbinate.  There is also the possibility of inviting a close friend or officiant who will read verses of love and lead the Jewish wedding ceremony.

Hiring A Planner For A Destination Wedding In Israel